This is not affected by the presence or absence of light.

But in certain green plants, there are two distinct types of respiration – photorespiration and dark respiration.

Respiration that occurs in photosynthetic tissues in the presence of light and results in increased rate of carbondioxide evolution is called photorespiration or light respiration.

Oxidation of RuBP in the presence of high oxygen is the first reaction of photorespiration.

This reaction is catalysed by Rubisco* enzyme called carboxylase.

It leads to the formation of 2C compound – phosphoglycolic acid and 3C compound PGA.

From the chloroplast, the glycolic acid diffuses into the peroxisome where it is oxidised to glyoxalic acid and hydrogen peroxide. 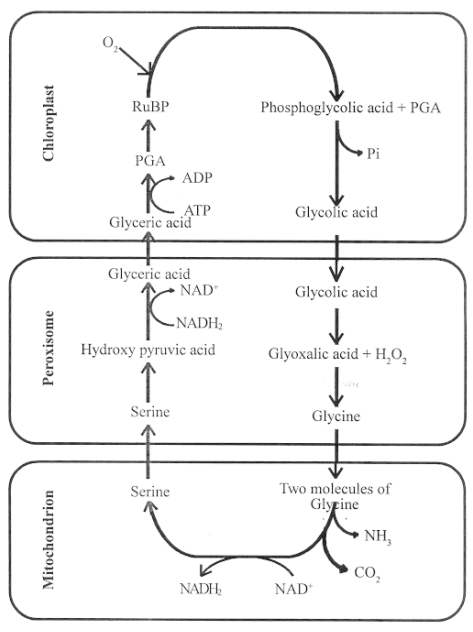 Glycine molecules enter into mitochondria where two molecules of glycine combine to give a molecule of serine, NH3 and CO2.

During this process, NAD+ is reduced to NADH2.

The aminoacid serine is taken to peroxisome where, it is converted into hydroxy pyruvic acid.

The glyceric acid leaves peroxisome and enters chloroplast, where it is phosphorylated to PGA, which enters into Calvin cycle.

During the photorespiratory pathway, one CO2 molecule released in mitochondria is to be re-fixed.

Under the conditions of high light and limited CO2 supply, photo respiration protects the plants from photooxidative damage.

This means that, if enough CO2 is not available to utilize light energy, excess energy causes damage to plant.

However, photo respiration utilizes part of the light energy and saves the plant from photooxidative damage.

Difference between photorespiration and dark respiration