The two molecules of pyruvic acid formed from a glucose molecule
move into mitochondria and are oxidized, decarboxylated to two molecules
of acetyl coenzyme A (acetyl Co~A).

These 2 carbon compounds are formed by

This reaction is catalyzed by pyruvic dehydrogenase and two molecules of NAD+ are reduced to NADH2.

Oxidative decarboxylation of pyruvic acid occurs only under aerobic condition.

Under anaerobic conditions, the pyruvic acid is reduced either to lactic acid or ethyl alcohol depending on the nature of the organism.

In 1937, Sir Hans Adolf Krebs described the catalytic role of pyruvic
acid for the production of energy in the cell.

The series of cyclic reactions involved in converting pyruvic acid to carbondioxide and water in mitochondria is called Krebs cycle.

2. Citric acid is dehydrated to form cis-aconitic acid in the presence
of aconitase

4. The isocitric acid is oxidatively decarboxylated to a – ketoglutaric
acid. This reaction is catalyzed by isocitric dehydrogenase. During this
reaction, one NADH2 is formed.

6. The succinyl Co~A is hydrolysed to succinic acid in the presence
of succinyl Co-A synthetase. In this reaction, ADP is phosphorylated to
ATP. This is called substrate level phosphorylation.

7. The succinic acid is oxidized to form fumaric acid by succinic
dehydrogenase. Here, FAD+ is reduced to FADH2.

8. The fumaric acid is converted to malic acid by the addition of a
molecule of water. This reaction is catalyzed by fumarase. 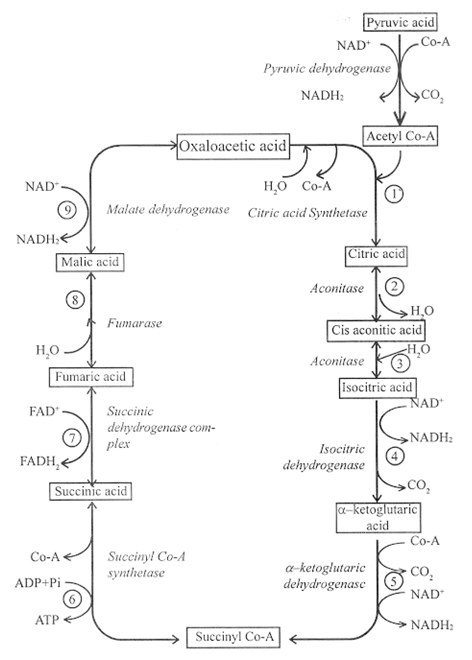 9. The malic acid is oxidized to oxaloacetic acid by the enzyme malic
dehydrogenase. Here, NAD+ is reduced to NADH2.

In one step, there is substrate level phosphorylation whch directly yield 2ATP molecules.

So, during Krebs cycle, every 2 molecules of acetyl CoA enter into Krebs cycle 24 ATP molecules are generated.

So, primarily it is a energy producing system.

Since, Krebs cycle involves with both anabolic and catabolic processes, it is also described as amphibolic process.