Plants are classified into three classes 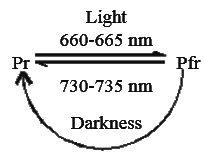 Based on the absorption spectra, Pr is also called P 660 and Pfr is P 730. In short day plants, Pr promotes flowering while Pfr suppresses it , while it is viceversa in long day plants.

The term vernalization was first introduced by a Russian scientist
T.D. Lysenko in 1920. Many species, especially biennials and perennials are induced to flower at low temperature range of 1oC to 10oC. This is known as vernalization.

The following are the steps to be taken to induce vernalization. Seeds are allowed to germinate and subjected to cold treatment for varying period of time depending on the species. Germinated seeds after this treatment are allowed to dry for sometime and then sown.

Russian scientists have used vernalization to shorten the time of crop maturity by hastening the flowering processes which are brought about by cold treatment.

Crops can be produced earlier by vernalization. They can be cultivated in places where they naturally do not grow. Vernalization helps to accelerate the plant breeding.