Most of the green plants are self- dependent, because they synthesize their own food materials by photosynthesis.

Such a mode of nutrition is described as autotrophic.  Autotrophic  plants are of different   types   according   to   their ecological environments.

Different environments cause differences in their morphology.

Among the autotrophic plants, epiphytes are peculiar.

These plants usually grow on the branches of the trees.

Epiphytic plants are not parasitic on these trees, but they only make use of the place to grow.

They have two types of roots – clinging roots and aerial roots.

Clinging roots fix the epiphytes to the bark of the tree and also absorb the little nutrients found in the debris accumulating on the bark.

The aerial roots hang about in the air.

These roots are usually green and covered by a spongy tissue called velamen which absorbs the moisture in the air as well as rain water.

Due to lack of chlorophyll or nitrogen defeciency, some plants have to depend on other plants, insects or dead organic matter for their food.

Such type of nutrition is known as heterotrophic.

Heterotrophic plants are grouped into saprophytic, parasitic and insectivorous plants. 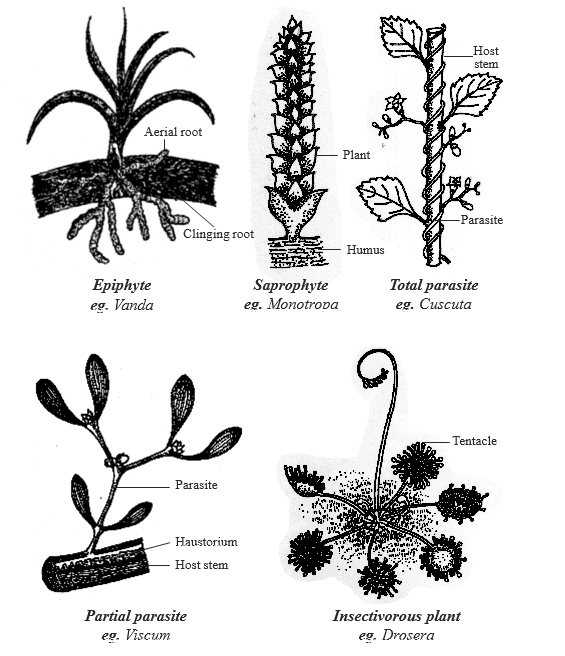 They are called saprophytic plants.

Many fungi and bacteria are saprophytes.

Certain angiosperms like Monotropa lack chlorophyll and have mycorrhizal roots.

This plant absorbs nourishments from the humus through their mycorrhizal roots.

Some plants get their nourishments from other living plants or animals.

They are called parasitic plants.

The plants or animals from which the parasites get their nourishments are called hosts.

Parasites have some special roots, which penetrate the host plants and absorb food from the phloem and water and minerals from xylem.

These roots are called haustoria.

Parasitic angiosperms are of two types.

Some plants completely lack chlorophyll and do not grow in the soil.

Therefore, it is totally dependent on the host stem for organic food materials, water and minerals.

They are called total parasites.

It twines around the stem of the host and sends haustoria into it to absorb nourishments.

Some plants absorb only water and mineral salts from the stem of host plant.

They can manufacture their own food due to the presence of green leaves.

The haustoria of these plants have connection only with the xylem of the host to absorb water and mineral salts.

These plants are called partial parasites.

Though insectivorous plants are capable of manufacturing carbohydrates by photosynthesis, they are not able to synthesize enough proteins due to the deficiency of nitrogen.

They overcome this deficiency by catching small insects and digesting them.

Their leaves are modified in various ways for this purpose.

Drosera is a small plant growing in marshy places.

This plant is also known as sundew plant.

The leaves of this plant have numerous hair-like structures called tentacles.

Each tentacle has got a gland at the tip.

The gland secretes a sticky fluid.

This fluid shines in sunlight and appears as dew;

When an insect is attracted by the shining sticky fluid and tries to sit on the leaf, it is entangled in the sticky fluid.

At once, the sensitive tentacles surround the insect and curve inward on it.

Then the glands secrete digestive juices which contain proteolytic enzymes.

The enzymes digest the proteins of the insect body.

The digested food is finally absorbed by the leaves and the tentacles again come in their original straight position.

For more details about Mode of nutrition in plants click here