C3 and C4 pathways is explained in detail.

It was once thought that all green plants fix CO2 through Calvin cycle only.

In this chapter, we will know more about this.

Hatch and Slack observed that 4C compounds such as oxaloaceticacid, malate and aspartate were the first formed compounds, when the leaves of sugarcane were exposed to 14CO2 for one second.

So, sugarcane is an example for C4 plant.

When the leaves of rice plant are exposed to 14CO2 3C compound called phosphoglyceric acid is formed.

So, rice plant is an example for C3 plant.

In C3 plants, photosynthesis occurs only in mesophyll cells.

In light reactions ATP and NADPH2 are produced and oxygen is released as a byproduct.

CO2 is reduced to carbohydrates by dark reactions. 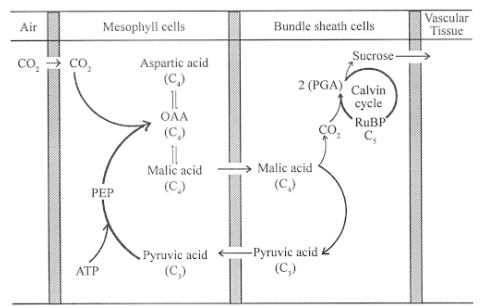 1. The first step involves the carboxylation of phosphoenol pyruvic acid in the chloroplasts of mesophyll cells to form a 4C compound, oxaloacetic acid.

This reaction is catalysed by the enzyme phosphoenol pyruvate carboxylase

2. Oxaloacetic acid is converted into aspartic acid by the enzyme transaminase or it may be reduced to malic acid by NADP+ specific malate dehydrogenase.

3. Malic acid or aspartic acid formed in chloroplast of mesophyll cells is transferred to the chloroplasts of bundle sheath where it is decarboxylated to form CO2 and pyruvic acid in the presence of NADP+specific malic enzyme.

Some of the 3-phosphoglyceric acid molecules are utilised to produce sucrose and starch, while remaining PGA molecules are used for the regeneration of RuBP.

5. The pyruvic acid produced in step (3) is transferred to the chloroplasts of mesophyll cells where it is phosphorylated to regenerate phosphoenolpyruvic acid .

This reaction is catalysed by pyruvate kinase in the presence of Mg 2+.

The AMP is phosphorylated by ATP in the presence of adenylate kinase to form 2 molecules of ADP.

C4 plants are photosynthetically more efficient than C3 plants, because the net requirement of ATP and NADPH2 for the fixation of one molecule of CO2 is considerably lower in C4 plants than in C3 plants. 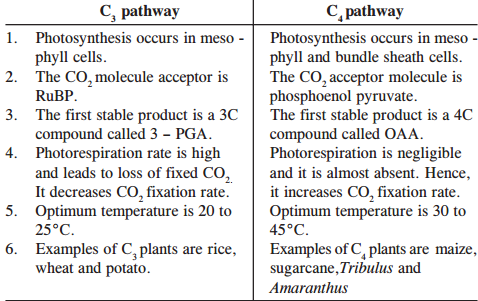 For more information about C3 and C4 pathways click here