In the previous chapter, you have learnt that light energy is converted into chemical energy and stored in complex organic molecules called carbohydrates – glucose and starch.

The breaking of C – C bonds of such compounds through oxidation releases a considerable amount of energy.

This energy is utilized for various metabolic activities at cellular level.

This phenomenon of release of energy by oxidation of various organic molecules is known as respiration.

The compounds that are oxidised during this process are known as respiratory substrates.

Carbohydrate is the common respiratory substrate.

During respiration, the whole energy contained in the respiratory substrate is not released all at once.

In respiration, oxygen is utilized and carbondioxide, water and energy are released.

Respiration is an exothermic reaction and the oxidation of glucose is given in the following equation.

The energy released during this process is transformed into usable form of energy as adenosine triphosphate (ATP).

ATP molecules act as carriers of free energy between energy yielding and energy requiring reactions of the cell.

Thus, ATP is described as energy currency of the cell.

It is a nucloetide consisting of adenine, ribose sugar and three phosphate groups.

It is an energy rich compound and contains two high energy terminal bonds.

A large amount of free energy is liberated, when these bonds are broken by hydrolysis. 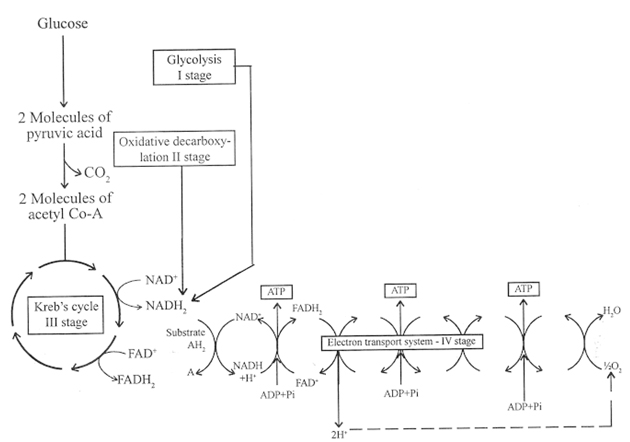 Mechanism of respiration on glycolysis

Both the coenzymes, (NAD+) and (FAD+) act as hydrogen carriers from respiratory substrate to electron transport chain, where H+ and electrons are transferred to oxygen to form water.

This electron transport results in the release of energy, which is used to phosphorylate ADP to ATP.

Hence, the electron transport chain reactions are referred to as oxidative phosphorylation.

Hence, it is otherwise known as EMP pathway.

It occurs in cytoplasm.

It is common in all organisms.

The overall reaction of glycolysis is given in the following equation.

Reactions involved in glycolysis are as follows

1. The glucose is phosphorylated with ATP to form glucose-6- phosphate. The reaction is catalyzed by the enzyme hexokinase.

3. Fructose-6-phosphate is then phosphorylated using ATP to form fructose 1,6-bisphosphate. This reaction is catalyzed by phosphofructokinase. The ATP is dephosphorylated to ADP.

4. Fructose 1,6-bisphosphate is cleaved by the enzyme aldolase to two molecules of 3C compounds – dihydroxy acetone phosphate (DHAP) and glyceraldehyde 3-phosphate. These two trioses are isomers. 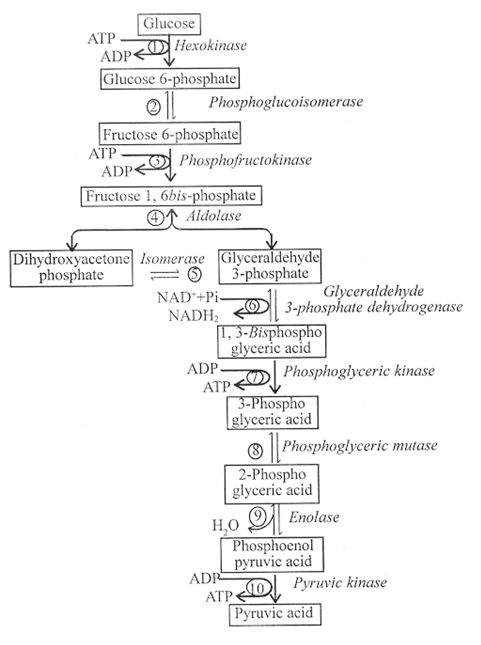 9. A molecule of 2-phosphoglyceric acid is dehydrated to a molecule
of 2-phosphoenol pyruvic acid by enolase. Removal of water molecule
from the substrate is called enolation.

Thus, in the triose phase, two molecules of a molecule of 3-phospho glyceraldehyde produce 2 molecules of pyruvic acid.