Anaerobiosis means life in the absence of oxygen.

Certain organisms can survive in the absence of oxygen.

The respiration which takes place in the absence of free oxygen molecules is called anaerobic respiration.

It occurs in yeast and some bacteria.

Hence, they are known as anaerobes.

Glycolysis alone occurs in these organisms.

The splitting of glucose into two molecules of pyruvic acid is given in the following equation.

In anaerobic respiration, the respiratory substrate is not completely
oxidized to release energy.

Glucose is split into two molecules of pyruvic acid.

The pyruvic acid is further converted into either ethanol or organic acids like lactic acid.

Fermentation is a good example for anaerobic respiration.

Respiratory quotient may be defined as “the ratio between the volume of carbondioxide given out and oxygen consumed during respiration”.

This value depends upon the nature of the respiratory substrate and its rate of oxidation. 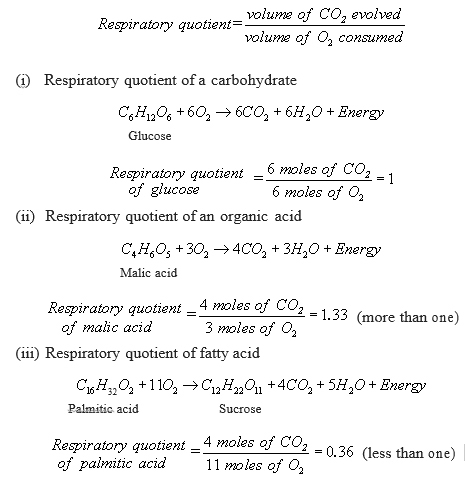 In anaerobic respiration, carbondioxide is evolved but oxygen is not
consumed.

Therefore, the respiratory quotient in such case is infinity.
For example,

At a given low concentration of carbondioxide and nonlimiting light
intensity, the photosynthetic rate of a given plant will be equal to the total amount of respiration, which includes both dark respiration and
photorespiration.

The concentration of CO2 at which photosynthesis just compensates the respiration is referred to as carbondioxide compensation point.

At carbondioxide compensation point, the amount of CO2 uptake for photosynthesis is equal to that of CO2 generated.

Through respiration including photorespiration, so the net photosynthesis is zero under these conditions.

The anaerobic breakdown of glucose to  carbondioxide and ethanol is a form of respiration referred to fermentation.

It is normally carried by yeast cells and accounts for the production of alcohol in alcoholic beverages.

In fermentation process, if glucose is converted into ethanol then it is called ethanolic fermentation.

It is carried out by the bacterium Bacillus acidilacti.

Kuhne’s fermentation tube consists of an upright glass tube and a
side tube with a bulb.

10 per cent glucose solution mixed with baker’s yeast is taken in the Kuhne’s tube and the tube is completely filled.

After some time, the glucose solution is fermented and gives out an alcoholic smell.

The level in the upright tube will fall due to the accumulation of CO2 gas.

It is because yeast contains the enzyme zymase which converts glucose solution into alcohol and CO2.

When a crystal of KOH is introduced into the tube, the KOH will absorb CO2 and the level of the solution will rise in the upright tube.