The light driven reactions of photosynthesis are referred to as electron transport chain.

When PS II absorbs photons of light, it is excited and the electrons are transported through electron transport chain of plastoquinone, cytochrome b6, cytochrome f and plastocyanin.

The electrons released from PS II phosphorylate ADP to ATP.

This process of ATP formation from ADP in the presence of light in chloroplast is called photophosphorylation.

Now, the PS II is in oxidised state.

It creates a potential to split water molecules to protons, electrons and oxygen.

This light dependent splitting of water molecules is called photolysis of water.

Manganese, calcium and chloride ions play prominent roles in the photolysis of water.

The electrons thus released are used in the reduction of PS II.

Similar to PS II, PS I is excited by absorbing photons of light and gets oxidised.

This oxidised state of the PS I draws electrons from PS II and gets reduced.

The electrons released to PS I are transported through electron transport chain of ferredoxin reducing substrate, ferredoxin and ferredoxin NADP reductase to reduce NADP+ to NADPH2.

When the molecules in the PS I are excited the electrons are released. So, an electron deficiency or a hole is made in the PS I.

This electron is now transferred to ferredoxin to reduce NADP+.

When the molecules in the PS II get excited, electrons are released.

They are transferred to fill the hole in PS I through plastoquinone, cytochrome b6, cytochrome f and plastocyanin.

When the electron is transported between plastoquinone and cytochrome f, ADP is phosphorylated to ATP.

The ‘hole’ in the PS I has been filled by the electron from PS II.

Then the electrons are transferred from PS I to NADP+ for reduction.

The noncyclic electron transport takes place in the form of ‘Z’. Hence, it is also called Z-scheme. 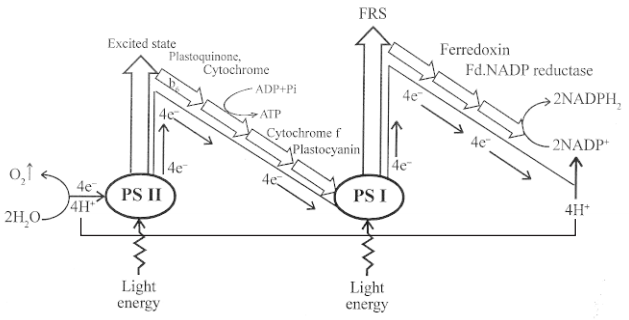 Under the conditions of

(i) PS I only remains active

(ii) photolysis of water does not take place

(iii) requirement of ATP is more and

When the molecule in the PS I is excited, the electrons are released.

The electrons are captured by ferredoxin through ferredoxin reducing substrate (FRS).

Due to non-availability of NADP+, electrons from ferredoxin fall back to the molecules of PS I through the electron carriers ¬ cytochrome b6, cytochrome f and plastocyanin.

These electron carriers facilitate the down hill transport of electrons from FRS to PS I.

Thus, two ATP molecules are produced in this cycle. 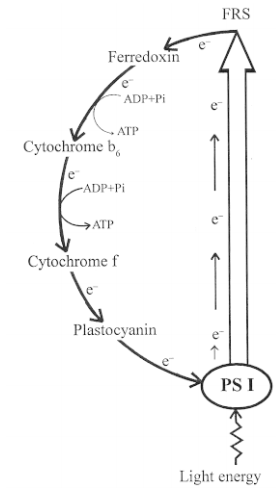