The aim of this experiment is to demonstrate liberation of carbon
dioxide during respiration.

The respiroscope is a glass apparatus consisting of a bulb like part with a bent neck and vertical tube.

Germinating seeds are taken in the bulb and the mouth of the tube is kept immersed in the beaker containing KOH solution as shown in the figure.

The respiroscope is fixed in the vertical position with the help of a stand.

Thus, the enclosed air in the bulb is completely cut off from the atmosphere.

The apparatus is kept undisturbed for few hours.

It is observed that the level of KOH solution in the limb is raised.

The KOH solution absorbs carbondioxide released by the seeds and a vacuum is created. It results in the raise of KOH level. 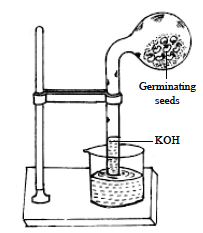 In anaerobes, glucose is partially degraded by glycolysis and fermentation.

In 1938, Dickens discovered an alternate pathway for the utilization of glucose by the living cells.

This pathway consists of major phases – oxidative and nonoxidative phases.

Pentose phosphate pathway takes place in the cytoplasm only.

In this phase, glucose is oxidized and decarboxylated with the
formation of pentose through phosphogluconic acid as shown in the flow
chart.

The essential feature of this phase is the production of NADPH2.

1. Glucose is phosphorylated to glucose-6-phosphate by hexokinase.

NADP+ is reduced to NADPH2. 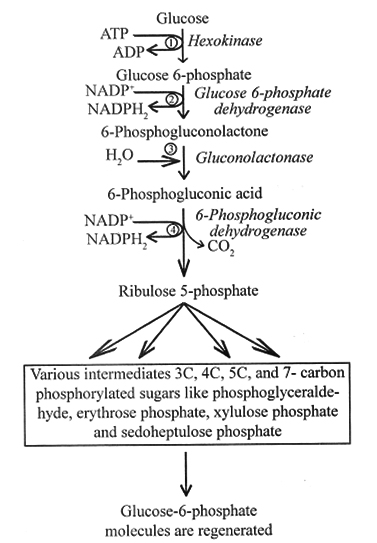 In this phase, various intermediates such as 3C, 4C, 5C and 7-carbon
phosphorylated sugars are produced.

To summarize, six molecules of glucophosphate enter this pathway.

Out of six glucose molecules one is completely oxidized and other five molecules are involved in the formation of 3C, 4C, 5C, and 7- carbon sugar intermediates.

From these intermediates, five molecules of glucose-6-phosphate are regenerated.

The generates NADPH2 molecules which are used as reductants in
biosynthetic processes.

Production of NADPH2 is not linked to ATP generation in pentose phosphate pathway.

It provides ribose sugar for the synthesis of nucleic acids.

They provides erythrose phosphate required for the synthesis of aromatic compounds.

It plays an important role in fixation of CO2 in photosynthesis through Ru5P.