In the previous unit, you have studied several types of cells and their organization to form tissue and tissue systems.

Now, we shall study how characters and traits are inherited from one generation to another.

Sexual reproduction, besides producing individuals, introduces variability in the offspring by combining traits of parents.

How are these traits inherited? Now, we know that the units of heredity are genes that are transmitted from one generation to another.

The genes are arranged in a linear manner at specific positions on specific chromosomes.

Differences in gene expression are the basis for differentiation of the organisms.

This unit will acquaint you with various aspects of genetics.

Chromosomes are the physical carriers of genes, which are made up of DNA and associated proteins.

The term chromosome was introduced by Waldeyer in 1888. Chromosomes occur in all the living organisms.

Bridges in 1916 was the first to prove that the genes are carried on the chromosome. 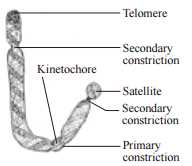 Each chromosome consists of similar structures called chromatids. They are identical and are called sister chromatids.

The primary constriction is made up of centromere and kinetochore. Both the chromatids are joined at centromere, which is essential for the movement of chromosomes at anaphase.

If the centromere of the chromosomes is damaged, such chromosome fails to move at anaphase.

The number of centromeres varies from chromosome to chromosome. The monocentric

The centromere contains a complex system of fibres called kinetochore. Each centromere has two kinetochores lined with chromosomal arms.

The kinetochore is made up of protein fibres and microtubules which assist in the formation of spindles during mitosis and meiosis.

A satellite is a short chromosomal segment and separated from the main chromosome by a relatively elongated secondary constriction.

A chromosome with a satellite is called SAT-chromosome.

Chromatin is a viscous gelatinous substance that contains DNA, RNA, histone and non–histone proteins. H1, H2A, H213, H3 and H4 are the five types of histones found in the chromatin.

The chromatin is formed by a series of repeated units called nucleosomes. Each nucleosome has a core of eight histone subunits.

Telomere is the terminal part of chromosome. It offers stability to the chromosome.

For more details about Structure of chromosome click here