Role of DNA – Hereditary, and Bacterial transformation are explained in detail.

It is evident that chromosomes are the carriers of genetic material. Chromosomes contain proteins, DNA and RNA.

Role of DNA as a genetic material

It is universally accepted that DNA is the genetic material in most of the organisms and higher organisms.

In most of the plant viruses, RNA is the genetic material.

There are many direct evidences for DNA being the genetic material.

Here, we will discuss one of the evidences illustrated by Frederick Griffith. 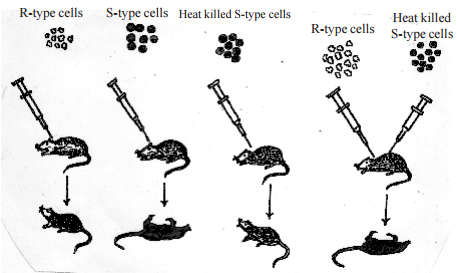 This strain was called strain-S.

Another strain which lacked the proper polysaccharide coat is harmless and produces rough colonies.

This strain was called strain-R.

When Griffith injected S-type of cells into the mouse, the mouse died.

When R-type cells were injected into the mouse, the mice did not die.

He injected heat killed S-type cells into the mouse. The mouse did not die.

When the mixture of heat killed S-type cells and R-type cells was injected into the mouse, the mouse was dead.

The living rough strain of Diplococcus had been transformed into S-type cells.

That is the hereditary material of heat killed S-type cells had transformed R-type cells into virulent smooth strains.

Thus the phenomenon of changing the character of one strain by transferring the DNA of another strain into the former is called transformation.