In an organism, any visible abnormality in chromosome number or structure from the diploid set is known as chromosomal aberration.

The chromosomal aberrations based on the structure of the chromosome are of four types – deletion, duplication, inversion and transversion.

The loss of a segment of the genetic material in a chromosome is called deletion.

It may be terminal or intercalary. When the deletion occurs near the end of the chromosome, then it is called terminal deletion.

When the deletion occurs in the middle of the chromosome then, it is called intercalary deletion.

Most of the deletions lead to death of an organism.

In Drosophila, corn and peas a number of duplications are reported.

Some duplications are useful in the evolution of the organism.

It is another chromosomal abnormality in which, the order of genes in a chromosomal segment is reversed by an angle of 180°.

There are two types of inversion – pericentric and paracentric inversion.

In pericentric inversion, the inverted segment of the chromosome contains centromere.

Sometimes, it is responsible for evolution of the organism.

In paracentric inversion, the inverted segment of the chromosome has no centromere. 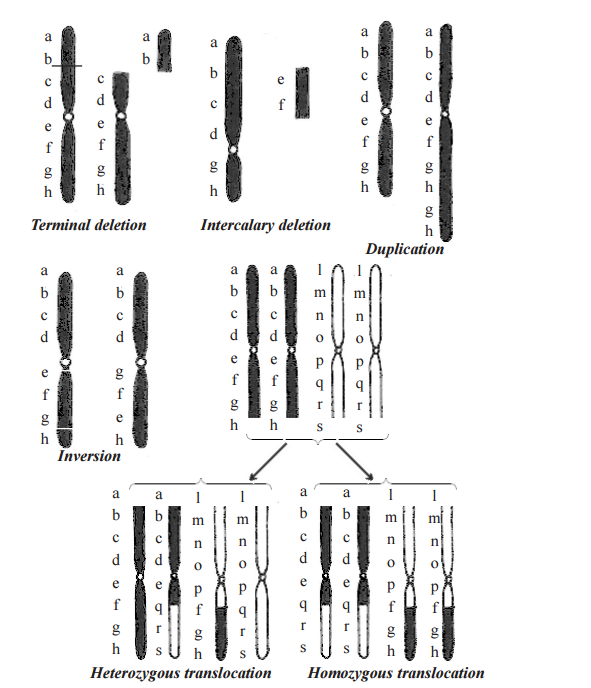 It is a kind of a chromosomal abnormality in which the interchange of the chromosomal segments occurs.

In heterozygous translocation, one member of each pair of chromosomes is normal and the other member is with interchanged segment.

But in homozygous translocation, both the members of paired chromosomes have translocated segments.