Replication of DNA is explained fully with detail.

DNA is the genetic material of almost all the organisms.

One of the active functions of DNA is to make its copies which are transmitted to the daughter cells.

Replication is the process by which DNA makes exact copies of itself.

Replication is the basis of life and takes place during the interphase stage.

Watson and Crick suggested the semiconservative method of replication of DNA.

This has been proved by Messelson and Stahl’s in their experiments on Escherichia coli using radioactive isotopes.

The replication of chromosome in E. coli is completed in 40 minutes.

During replication of DNA, the two complementary strand of DNA uncoil and separate from one end in a zipper like fashion.

The enzyme helicase unwinds the two strands and as a result replication fork is formed.

As the DNA unwinds, the part of the DNA that is found above the replication fork becomes supercoils.

These are called positive supercoils.

Based on separated DNA strands, new strands grow by the addition of nucleotides.

DNA polymerase I, II and III are involved in this elongation.

However, these enzymes are not capable of initiating DNA synthesis. 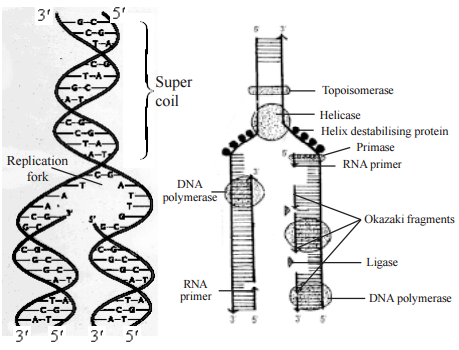 For the synthesis of new DNA, two things are required.

One is RNA primer and the enzyme primase.

The DNA polymerase moves along the newly formed RNA primer nucleotides, which leads to the elongation of DNA.

In the other strand, DNA is synthesized in small fragments called Okazaki fragments.

These fragments are linked by the enzyme called ligase.

In the resulting DNA, one of the strand is parental and the other is the newer strand which is formed discontinuously.

For more details about replication of DNA click here