DNA and RNA are identified in the nucleus.

They are complex macro molecules and made up of millions of smaller units called nucleotides.

Hence, DNA is a macromolecular substance with double stranded polynucleotide.

Each nucleotide is made up of pentose sugar, a phosphate group and a nitrogenous base.

Ribose is the constituent sugar in RNA and Deoxyribose in DNA.

The nitrogenous bases are of two kinds – purines and pyrimidines.

Adenine and guanine are the purines and thymine and cytosine are pyrimidines.

The nitrogenous bases found in DNA are adenine, guanine, cytosine and thymine, whereas in RNA thymine is replaced by uracil.

The sub-unit containing only sugar and nitrogenous base is known as nucleoside.

A nucleoside combines with phosphate to form a nucleotide. Thus, four kinds of nucleotides are seen in DNA molecule. 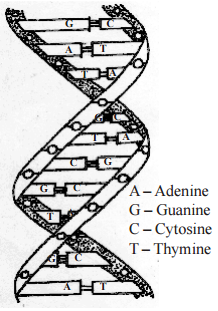 In 1953, James Watson and Francis Crick proposed double helix DNA model on the basis of x-ray diffraction studies with photographs of DNA taken by Wilkins and Franklin.

DNA is a double stranded structure in which the two strands are coiled around each other forming a double helix.

The DNA duplex is “coil of life”.

There are two grooves found in DNA molecule namely major and minor grooves.

The backbone of the helix is formed of sugar and phosphate molecule.

The nitrogenous bases are attached to sugar molecules.

The two nucleotide strands are held together by unstable hydrogen bonds.

Erwin Chargaff in 1949 showed that

(i) The bases pair in specific manner. Adenine always pairs with thymine and guanine pairs with cytosine.

These empirical rules regarding the composition of bases in DNA is collectively known as Chargaff’s law or Base pair rules.

The two strands are interwined in clockwise direction. The width of DNA molecule is 20 A.

The strand completes a turn every 34 A along its length. There are ten nucleotides per turn.

The internucleotide distance is 3.4 A. Watson and Crick model of DNA is called B-form DNA.

The chains in B-form DNA are in right handed orientation.

It controls all the biochemical activities of the cell.

They carries genetic information from one generation to other. It controls protein synthesis and synthesize RNAs.

For more detail about Structure of DNA click here