Anatomy of a dicot leaves and monocot leaves

Anatomy of a dicot leaf and monocot leaves

Leaves are very important vegetative organs because they are mainly concerned with photosynthesis and transpiration.

Like stem and roots, leaves also have the three tissue systems – dermal, ground and vascular.

The dermal tissue system consists of an upper epidermis and lower epidermis.

Stomata occur in both the epidermis but more frequently in the lower epidermis.

The ground tissue system that lies between the epidermal layers of leaf is known as mesophyll tissue.

A leaf showing this differentiation in mesophyll is designated as dorsiventral. It is common in dicot leaves.

If mesophyll is not differentiated like this in a leaf (i.e., made of only spongy or palisade parenchyma) as in monocots, it is called isobilateral.

The presence of air spaces is a special feature of spongy cells. They facilitate the gaseous exchange between the internal photosynthetic tissue (mesophyll) and the external atmosphere through the stomata.

The vascular tissue system is composed of vascular bundles. They are collateral and closed.

The vascular tissue forms the skeleton of the leaf and they are known as veins. The veins supply water and minerals to the photosynthetic tissue.

Thus the morphological and anatomical features of the leaf help in its physiological functions.

A dicotyledonous leaf is generally dorsiventral. It has upper and lower epidermis.

The epidermis is usually made up of a single layer of cells that are closely packed.

The cuticle on the upper epidermis is thicker than that of lower epidermis. The minute openings found on the epidermis are called stomata.

Stomata are more in number on the lower epidermis than on the upper epidermis. A stoma is surrounded by a pair of bean shaped cells called guard cells. 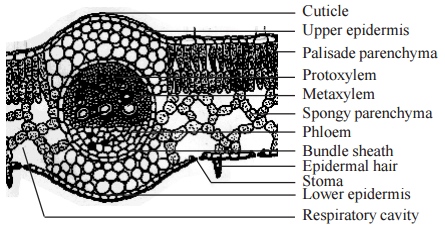 The main function of the epidermis is to give protection to the inner tissue called mesophyll.

The entire tissue between the upper and lower epidermis is called the mesophyll (Gk meso=in the middle; phyllome=leaf).

There are two regions in the mesophyll. They are palisade parenchyma and spongy parenchyma.

Palisade parenchyma cells are seen beneath the upper epidermis. It consists of vertically elongated cylindrical cells in one or more layers.

As compared to palisade cells, the spongy cells contain lesser number of chloroplasts.

Spongy cells facilitate the exchange of gases with the help of air spaces.

The air space that is found next to the stoma is called respiratory cavity or sub-stomatal cavity.

Vascular tissues are present in the veins of leaf. Vascular bundles are conjoint, collateral and closed.

Xylem consists of vessels and xylem parenchyma. Tracheids and xylem fibres are absent.

What is a dorsiventral leaves? Give an example.

Write short notes on the epidermis of a dicot leaf.

What is an isobilateral leaf? Give an example.

Write short notes on the vascular tissues of a dicot leaf.

What is a mesophyll?

Write short notes on the mesophyll of a dicot leaf.

Draw and label the parts of a T.S. of a dicot leaves.

What are guard cells?

What are the functions of stomata?

What is a respiratory cavity or sub-stomatal cavity?

Describe the internal structure of a dicot leaf.

What is a bundle sheath or border parenchyma in a leaf?