The embryo develops into an adult plant with roots, stem and leaves due to the activity of the apical meristem.

A mature plant has three kinds of tissue systems – the dermal, the fundamental and the vascular system.

The dermal system includes the epidermis, which is the primary outer protective covering of the plant body.

The periderm is another protective tissue that supplants the epidermis in the roots and stems that undergo secondary growth.

The fundamental tissue system includes tissues that form the ground substance of the plant in which other permanent tissues are found embedded.

Parenchyma, collenchyma and sclerenchyma are the main ground tissues.

The vascular system contains the two conducting tissues, the phloem and xylem.

In different parts of the plants, the various tissues are distributed in characteristic patterns.

This is best understood by studying their internal structure by cutting sections (transverse or longitudinal or both) of the part to be studied.

The internal structure of the monocot roots shows the following tissue systems from the periphery to the centre.

It is the outermost layer of the root. It consists of a single row of thin-walled parenchymatous cells without any intercellular space.

They absorb water and mineral salts from the soil. Root hairs are generally short lived.

The main function of rhizodermis is protection of the inner tissues.

The cortex is homogenous. i.e. the cortex is made up of only one type of tissue called parenchyma.

It consists of many layers of thin-walled parenchyma cells with lot of intercellular spaces.

Chloroplasts are absent in the cortical cells, but they store starch. The cells are living and possess leucoplasts.

The inner most layer of the cortex is endodermis. It is composed of single layer of barrel shaped parenchymatous cells.

This forms a complete ring around the stele. There is a band like structure made of suberin present in the radial and transverse walls of the endodermal cells.

They are called Casparian strips named after Casparay who first noted the strips. 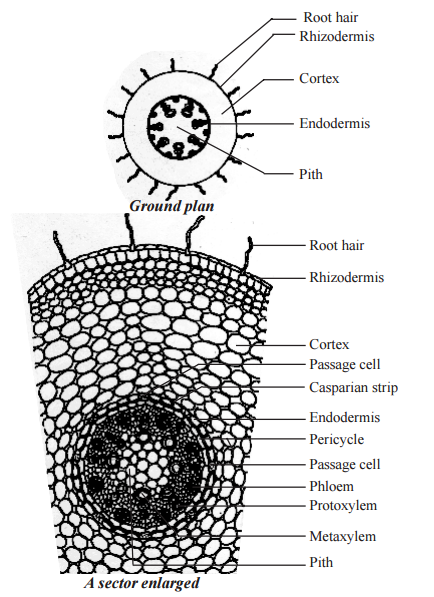 The endodermal cells, which are opposite to the protoxylem elements, are thin-walled without casparian strips.

These cells are called passage cells. Their function is to transport water and dissolved salts from the cortex to the xylem.

Water cannot pass through other endodermal cells due to casparian strips.

The main function of casparian strips in the endodermal cells is to prevent the re-entry of water into the cortex once water entered the xylem tissue.

All the tissues inside the endodermis comprise the stele. This includes pericycle, vascular system and pith.

Pericycle is the outermost layer of the stele and lies inner to the endodermis. It consists of a single layer of parenchymatous cells.

Vascular tissues are seen in radial arrangement. The number of protoxylem groups is many.

This arrangement of xylem is called polyarch. Xylem is in exarch condition.

The central portion is occupied by a large pith. It consists of thin-walled parenchyma cells with intercellular spaces.

These cells are filled with abundant starch grains.

Describe the primary structure of a monocot root.

Draw and label the parts of transverse section of monocot root.