A group of tissues performing a similar function irrespective of its position in the plant body is called a tissue system.

In 1875, Sachs recognized three tissue systems in the plants.

Epidermal tissue system is the outermost covering of plants.

It consists of epidermis, stomata and epidermal outgrowths.

But it is interrupted by stomata. In leaves some specialized cells which surround the stomata are called the guard cells.

Chloroplasts are present only in the guard cells of the epidermis. Other epidermal cells usually do not have chloroplasts.

The outer wall of epidermis is usually covered by cuticle.

Stoma is a minute pore surrounded by two guard cells.

The stomata occur mainly in the epidermis of leaves. In some plants such as sugarcane, the guard cells are bounded by some special cells.

They are distinct from other epidermal cells. These cells are called subsidiary or accessory cells.

Trichomes and root hairs are some epidermal outgrowths. The unicellular or multicellular appendages that originate from the epidermal cells are called trichomes.

Trichomes may be branched or unbranched. Rhizodermis has two types of epidermal cells – long cells and short cells.

1. This tissue system in the shoot checks excessive loss of water due to the presence of cuticle.

4. Trichomes are also helpful in the dispersal of seeds and fruits.

5. Root hairs absorb water and mineral salts from the soil.

In roots, xylem and phloem are arranged in an alternate manner on different radii.

It is called radial arrangement. In stems and leaves, xylem and phloem are arranged at the same radius and form a vascular bundle together.

They are collateral, bicollateral and concentric. 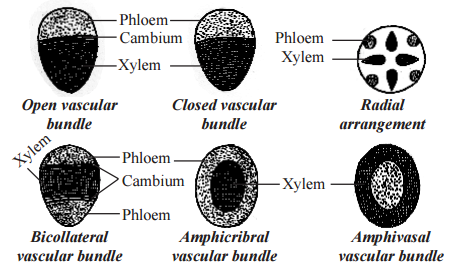 If phloem occurs on both the outer and inner sides of xylem, the bundle is called bicollateral.

Bicollateral vascular bundles are most typically seen in Cucurbitaceae.

This is of two types amphicribral and amphivasal. In amphicribral concentric vascular bundles, the phloem completely surrounds the xylem. eg. Polypodium.

In stem, protoxylem vessels are towards the centre, while metaxylem towards the periphery. This condition is known as endarch.

The ground or fundamental tissue system constitutes the main body of the plants.

It includes all the tissues except epidermis and vascular bundles.

In monocot stem, ground tissue system is a continuous mass of parenchymatous tissue in which vascular bundles are found scattered.

Here ground tissue is not differentiated into cortex, endodermis, pericycle and pith.

The cortex occurs between the epidermis and pericycle. Cortex may be a few to many layers in thickness.

In most cases, cortex is made up of parenchyma tissues. Intercellular spaces may or may not be present.

In the leaves, the ground tissue consists of chlorenchyma tissues. This region is called mesophyll.

The inner most layer of the cortex is called endodermis. Generally endodermis is made up of barrel shaped parenchyma cells.

These cells are arranged in a single layer without intercellular spaces.

Pericycle occurs between the endodermis and the vascular bundles. It is generally made up of parenchyma cells.

Lateral roots originate from the pericycle. Thus their origin is endogenous.

The central part of the ground tissue is known as pith or medulla. Generally this is made up of thin walled parenchyma cells which may be with or without intercellular spaces.