A tissue that consists of several kinds of cells but all of them function together as a single unit is called complex tissue. It is of two types – xylem and phloem.

Xylem (Greek word ‘xylos’= wood) is a complex tissue that is mainly responsible for the conduction of water and mineral salts from roots to other parts of the plant.

Xylem is made up of four kinds of cells – tracheids, vessels or tracheae, xylem fibres and xylem parenchyma.

Tracheids are elongated with blunt ends. Its lumen is broader than that of fibres. Their secondary wall is lignified.

In cross section, the tracheids appear polygonal and thick walled. The pits are simple or bordered.

There are different types of cell wall thickening due to deposition of secondary wall substances.

Tracheids are imperforate cells with bordered pits on their end walls. They are arranged one above the other.

Tracheids are chief water conducting elements in gymnosperms and pteridophytes. Here, the conduction of water and mineral salts takes place through the bordered pits.

They also offer mechanical support to the plants.

They occur parallel to the long axis of the plant body. Due to dissolution of entire end wall, a single pore is formed at the perforation plate.

The secondary wall thickenings of vessels are annular, spiral, scalariform, reticulate, or pitted as in tracheids.

Vessels are chief water conducting elements in angiosperms and they are absent in pteridophytes and gymnosperms.

However, in Gnetum of gymnosperms, vessels oc¬cur. The main function of vessel is conduction of water and minerals.

It also offers mechanical strength to the plant. 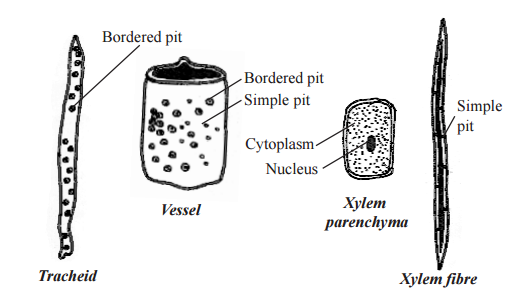 The fibres of sclerenchyma associated with the xylem are known as xylem fibres. They give additional mechanical support to the plant body.

They are present both in primary and secondary xylem. Xylem fibres are dead cells and have lignified walls with narrow lumen.

The parenchyma cells associated with the xylem are known as xylem parenchyma.

Xylem parenchyma is the only living tissue amongst the consituents of xylem. The cell wall is thin and made up of cellulose.

The xylem parenchyma cells store food reserves in the form of starch and fat. They also assist in conduction of water.