Classification of permanent tissue and simple tissue with characteristics

The cells, which are formed by apical meristem, are differentiated into different types of permanent tissues. These tissues have lost the power of dividing either permanently or temporarily.

Based on the constituent cells, the permanent tissue is classified into two types – simple tissue and complex tissue.

A tissue with the cells of similar structure and function is called simple tissue. It is of three types – parenchyma, collenchyma and sclerenchyma.

It is generally present in all organs of the plant. It constitutes the ground tissue in a plant. Parenchyma is the precursor of all the other tissues.

Parenchyma is a living tissue and made up of thin walled cells. The cell wall is made up of cellulose.

Parenchyma cells may be oval, spherical, rectangular, cylindrical or stellate.

The cells are usually polyhedral with 10 to12 facets. Parenchyma is of different types and some of them are discussed as follows. 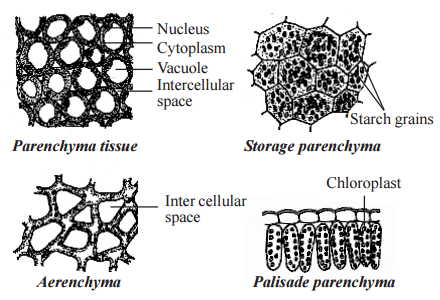 This air filled parenchyma tissue is called aerenchyma. It helps the plant to float in water. eg. Nymphaea and Hydrilla.

The parenchyma cells that are stored with starch grains are called storage parenchyma. eg. stem and root tubers.

In the petioles of banana and Canna, star shaped parenchyma cells are found. These cells are called stellate parenchyma.

In green parts of the plants, the parenchymatous cells have chloroplasts.

These cells are called chlorenchyma. Its important function is photosynthesis.

Collenchyma generally occurs in the dicot stems in two or more layers below the epidermis.

These layers constitute the hypodermis. It is absent in the roots of land plants. Collenchyma also occurs in petiole and pedicel.

It gives strength to young organs. Collenchyma is a living tissue. It consists of more or less elongated cells, which are polygonal in cross section.

The cell wall is unevenly thickened. The thickening is confined to the corners of the cells.

Besides cellulose, the cell wall contains high amounts of hemicellulose and pectin. 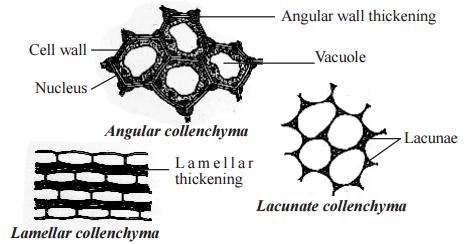 Collenchyma may contain chloroplasts and carry out photosynthesis.

Collenchyma is divided into three types –

In the hypodermis of Helianthus, only the tangential walls of collenchyma are thickened and the radial walls are devoid of thickening.

This type is called angular collenchyma. In the hypodermis of Ipomoea, the cell wall thickening materials are deposited on the walls bordering the intercellular spaces.

This type is called lacunate collenchyma.

Sclerenchyma is a dead tissue. The cells have lignified secondary walls. They lack protoplasts.

On the basis of origin, structure and function, sclerenchyma is divided into two types – sclereids and fibres.

The sclereids are different from fibres in the following respects.

Sclereids are shorter whereas fibres are longer sclereids possess numerous pits as compared to the fibres.

The Sclereids are dead cells. They vary greatly in shape and thickness. The cell wall is very thick due to lignification. Lumen is very much reduced.

The pits may be simple or branched. Usually sclereids are isodiametric, but in some plants they are elongated.

They are found in the outer seed coat. eg. Crotalaria. The rod shaped sclereids with dilated ends are called osteosclereids (bone cells).

Fibre cells are dead cells. They are very long and narrow with pointed ends. In transverse section, the fibres are polygonal with narrow lumen.

The secondary wall is evenly thickened with lignin. It possesses simple pits. Fibres are supporting tissues.

They provide mechanical strength to the plants and protect them from the strong winds.

The fibres that are found in the seed coat of some seeds are called surface fibres. eg. cotton.

What are the types of simple tissues and complex tissues?

What is a stellate parenchyma?

Write an essay on the location, structure and functions of
parenchyma.

Describe the location, structure and functions of collenchyma.