Evaporation is the process in which a liquid changes to the gaseous state at the free surface, below the boiling point through the the transfer of heat energy. Consider a body of water in a pond.

The molecules of water are in constant motion with a wide range of instantaneous velocities. An addition of heat causes this range and average speed to increase. 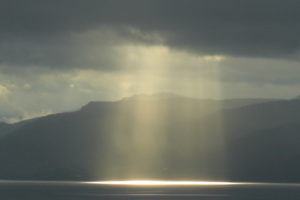 The net escape of water molecules from the liquid state to the gaseous state constitutes evaporation.

Evaporation is a cooling process in that the latent heat of vaporization (at about 585 cal/g of evaporated water) must be provided by the water body.

The rate of evaporation is dependent on  the

(i) vapour pressures at the water surface and air above,

(v) quality of water and

(vi) size of the water body.

The  rate  of  evcporation  is  proportional  to  the  difference  between the  saturation vapour pressure at the water temperature, ew  and the actual vapour pressure in the air,ea

where EL = rate of evaporation (mm I day) and C = a constant; ew and ea are in mm of mercury.

The above equation is known as Dalton’ s law of evaporation after John Dalton (1802) who first recognised this law.

Other factors remaining same, the rate of evaporation increases with an increase in the water temperature.

Thus for the same mean monthly temperature  it  is  possible  to  have  evaporation  to  different  degrees  in  a  lake  in different months.

Wind aids in removing the evaporated water vapour from the zone of evaporation and consequently creates greater scope for evaporation.

This critical wind-speed value is a  function  of  the  size  of  the  water  surface.  For  large  water  bodies  high-speed turbulent winds are needed to cause maximum rate of evaporation.

Other factors remaining same, a decrease in the barometric pressure,  as  in  high altitudes, increases evaporation.

When a solute is dissolved in water, the vapour pressure of the solution is less than that of pure water and hence causes reduction in the rate of evaporation.

The percent reduction in evaporation approximately corresponds to the percentage increase in the specific gravity. Thus, for example, under identical conditions evaporation from sea water is about 2-3% less than that from fresh water.