Study  of  subsurface  flow  is  equally important since about 30% of the world’s fresh water resources exist in the form of groundwater.

Further, the subsurface water forms a critical input for the sustenance of life and vegetation in arid zones.

Because of its importance as a significant source of water   supply,   various   aspects   of   groundwater   dealing   with   the   exploration, development and utilization have been extensively studied by workers from different disciplines, such as geology, geophysics, geochemistry, agricultural engineering, fluid mechanics and civil engineering and excellent treatises are available.

Water in the soil mantle is called subsurface water and is considered in two zones (Fig. 9.1): 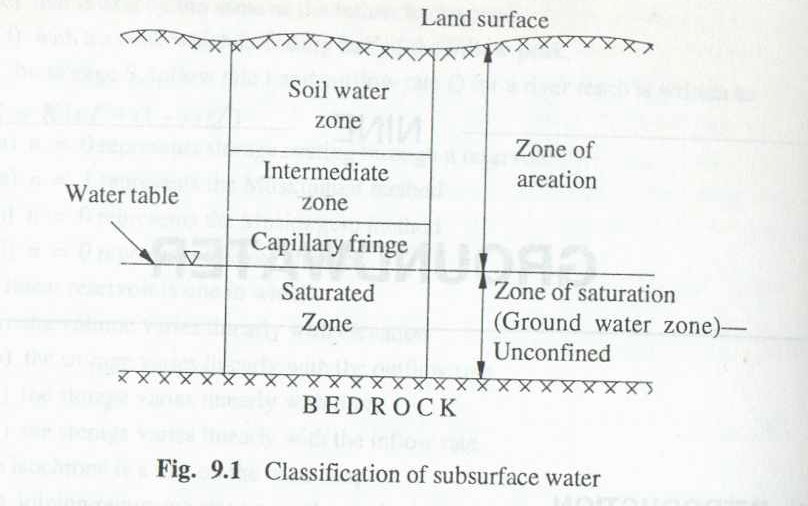 This zone, also known as groundwater zone, is the space in which all the pores of the soil are filled with water.

The water table forms its upper limit and marks a free surface, i.e. a surface having atmospheric pressure.

In this zone the soil pores are only partially saturated with water.

The space between the land surface and the water table marks the extent of this zone.

Further, the zone of aeration has three subzones:

This lies close to the ground surface in the major root band of the vegetation from which the water is lost to the atmosphere by evapotranspiration.

In this the water is held by capillary action.

This zone extends from the water table upwards to the limit of the capillary rise.

This lies between the soil water zone and the capillary fringe.

The thickness of the zone of aeration and its constituent subzones depend upon the  soil  texture  and  moisture  content  and  vary  from  region  to  region.

The  soil moisture in the zone of aeration is of importance in agricultural practice and irrigation engineering.

The present chapter is concerned only with the saturated zone.

All earth materials, from soils to rocks have pore spaces. Although these pores are completely saturated with water below the water table, from the groundwater utilization aspect only such material through which water moves easily and hence can be  extracted  with  ease  are  significant.

On  this basis  the  saturated  formations  are classified into four categories

These are discussed below:

An aquifer is a saturated  formation of earth material which not only stores water but yields it in sufficient quantity.

It is a formation through which only seepage is possible and thus the yield is insignificant compared to an aquifer. It is partly permeable.

A sandy clay unit is an example of aquitard. Through an aquitard appreciable quantities of water may leak to an aquifer below it.

it is a geological formation which is essentially impermeable  to the flow of water.

It may be considered as closed to water movement even though it may contain large amounts of water due to its high porosity. Clay is an example of an aquiclude.

It is a geological formation which is neither porous nor permeable. There are no interconnected openings and hence it cannot transmit water. Massive compact rock without any fractures is an aquifuge.

The definitions of aquifer, aquitard and aquiclude as above are relative.

A formation  which  may be considered  as an aquifer  at a place  where  water  is at a premium (e.g. arid zohes) may be classified as an aquitard or even aquiclude in an area where plenty of water is available.

The availability of groundwater from an aquifer at a place depends upon the rates of withdrawal and replenishment  (recharge).

Aquifers play the roles of both a transmission conduit and a storage.

An unconfined aquifer (also known as water table aquifer) is one in which a free water surface, i.e. a water table exists (Fig. 9.2).

Only the saturated zone of this aquifer is of importance in groundwater studies.

Recharge of this aquifer takes place through infiltration of precipitation from the ground surface.

A well driven into an unconfined aquifer will indicate a static water level corresponding to the water table level at that location.

A confined aquifer, also known as artesian aquifer, is an aquifer which is confined between two impervious beds such as aquicludes or aquifuges (Fig. 9.2).

Recharge of this aquifer takes place only in the area where it is exposed at the ground surface.

The water in the confined aquifer will be under pressure and hence the piezometric level will be much higher than the top level of the aquifer.

At some locations: the piezoelectric  level can attain a level higher than the land  surface  and a well driven  into the aquifer at such a location will flow freely without the aid of any pump.

In fact, the term “artesian” is derived from the fact that a large number of such free flow wells were found in Artois, a former province in north France.

Instances of free-flowing wells having as much as a 50-rn head at  the ground surface are reported.

A confined aquifer is called a leaky aquifer if either or both of its confining beds are aquitards.