Standard non recording rain gauge prescribed by the IMID is the Symon’ s gauge the details of which are shown below.

The gauge consists of a funnel with a sharp edged rim of 127 mm diameter, a cylindrical body, a receiver with a narrow neck and. handle and a splayed base which is fixed in the ground.

The receiver should have a narrow neck and should be sufficiently protected from radiation to minimize the loss of water from the receiver by evaporation.

To prevent rain from splashing in and out, the vertical wall of the sharp edged rim is made deep enough and the slope of the funnel steep enough (at least 45° ).

The rain falling into the funnel is collected in the receiver kept inside the body and is measured by means of  special measure glass (supplied along with the gauge) which is graduated Trim.

The receiver has a capacity of 175 mm of rain. In regions of heavy rainfall,  rain gauge with receivers of 375 mm or 1000 mm capacity may be used.

The measure glass has a capacity of 25 mm and can be read to nearest to drum. 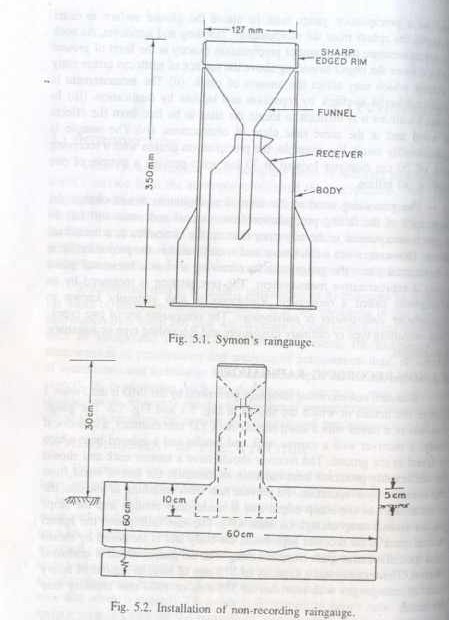 The gauge is fixed on a masonry or concrete foundation of size the base 60 cm 6 cm which is sunk into the ground.

Into this foundation the base of  the gauge is connected as shown in Fig 5.2.

So that the rim of is exactly 30 cm above the ground level. The top of the gauge  is perfectly horizontal.

Recently, the IMD has changed over to the use of fibre glass reinforced polyester rain gauge which are an improved version of the Symon’ s gauge. 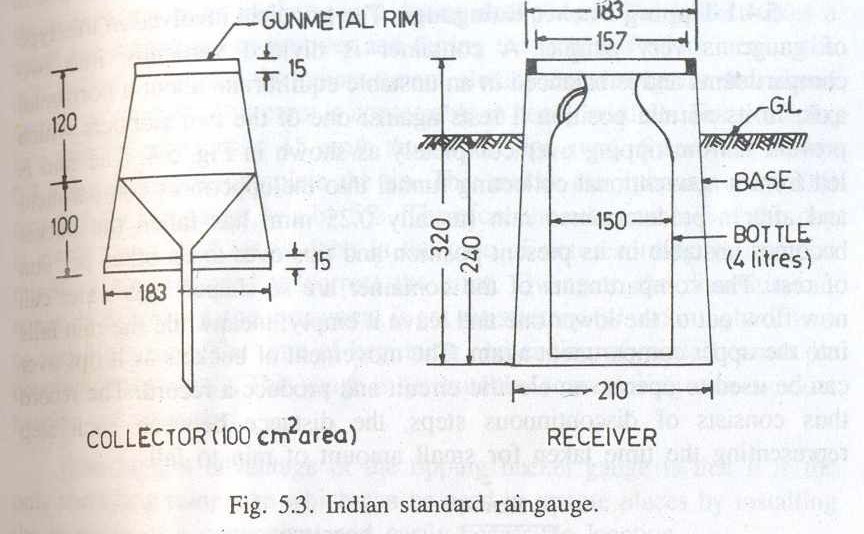 They have the capacity to measure rainfall depths of 100mm to l0 mm.

At the routine time of observation the funnel is removed, the receiver is taken out and the rain water collected in the receiver is carefully poured into the measure glass and read without any parallax error.

When the rainfall exceeds 25 mm the measure glass will be used as many times, as required.

The measured rainfall in the 24 hours ending with 8.30.A.M. is recorded as the rainfall of the day on which 8.30 A.M. observation is taken.

In regions of heavy rainfall, if it is suspected that the receiver (though of larger capacity) may not hold the entire rainfall of the day the measurements must be done more frequently with the last measurement being taken at 8.30 A.M.

The sum of all the readings taken in the last 24 hours is recorded as the rainfall of that day.

Non rain gauge give the amount of rainfall only.

In order to record the beginning and end of the rain and to measure the intensity of rainfall, a continous record rainfall of with time is required.

Although there are different types of recording rain gauge only three have gained widespread use.

The principle involved in this this type of gauge is very simple.

A container is divided vertically into two compartments and is balanced in an unstable equilibrium about a horizontal axis.

In its normal position it rests against one of the two stoppers which prevent it from tipping over completely as shown in Fig. 5.4.

The   rain   filled   from  a   conventional   collecting   funnel   into   the  uppermost compartment  and  after  a  predetermined  rain  (usually  0.25  mm)  has  fallen  but becomes unstable in its present position and tips over to its other position of rest.

The compartments of the container are so shaped that water can now flow out of the lower one and leave it empty; meanwhile the rain falls into the upper compartment again.

The movement of buckets as it tips over can be used to operate an electric circuit and produce a record.

The record thus consists of discontinuous steps, the distance between each step representing the time taken for small amount of rain to fall. 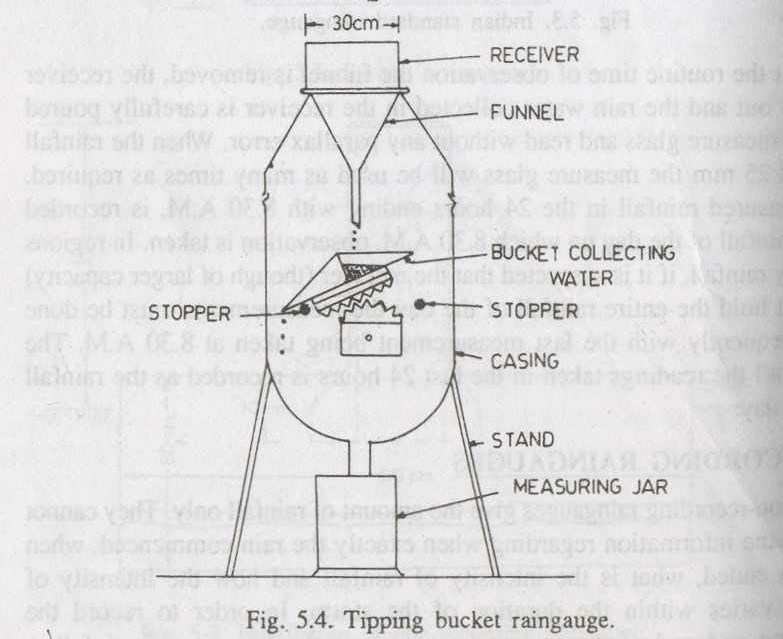 The disadvantages of this type of gauge are as follows. If the bucket are designed to tip at a convenient frequency for a particular intensity rainfall, they will tip either too soon or too late for other intensities.

As a result both the intensity and amount of rainfall recorded will be except during a storm which has the same intensity for which the buckets are designed.

The record obtained from this gauge is not in a convenient form. For higher intensities the bucket tips so rapidly that the jogs in the record during the period. They tend to overlap and blend into one broad solid line making it difficult.

The bucket takes a small but finite time to tip over and during the first half of its motion the rain is being led into the compartment already containing the calculated  amount  of  rainfall.

This  error  is  appreciable  in  heavy  rainfalls.  For example, in a rainfall of intensity 15 cm/h the bucket tips every 6 seconds.

About 0 s is required to complete the tip. This makes the intensity of rainfall recorded by the

gauge less by 5%. Therefore the total rainfall of the day is always measured (as is done in the case of non gauge) and this data may be used to correct the error.

Owing to the discontinuous nature of the record, the instrument is not satisfactory for use in light drizzle or very light rain.

The time of beginning and ending of rainfall cannot be determined accurately. This gauge is no suitable for measuring snow without heating the collector.

The biggest advantage of the tipping bucket gauge is that it is the only  recording  rain gauge  which  can  be  used  in remote  places  by  installing  the recorder at a convenient and easily accessible location.

In this type of gauge the rain falling on the receiving area is collected by the funnel and, is led into a storage bucket which rests on a weighing platform.

The weight of the rainfall received since the recording began is recorded continuously by transmitting the movement of the platform through a system of links and levers to a pen which makes a trace on a suitably graduated chart secured around a drum as shown in Fig. 5.5.

The drum is driven mechanically by a spring clock. The drum may be made to revolve once a day, once a week or in any other desired period. 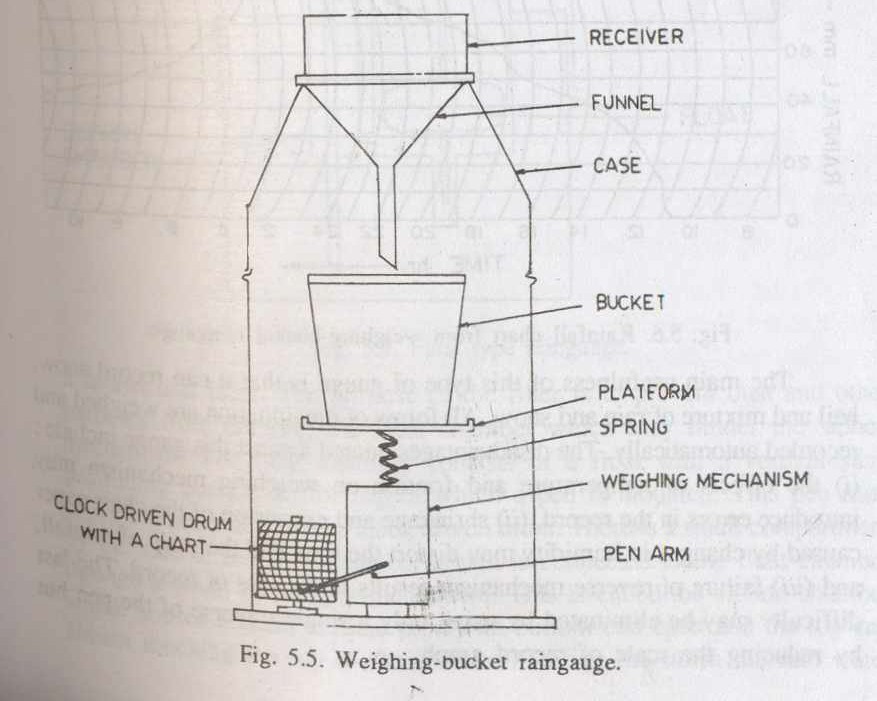 This type of gauge normally has no provision for emptying itself.

To overcome this difficulty the mechanism may be arranged to reverse the of the pen alter certain amount  of  precipitation  has  accumulated  and  reverse  again  after  another  equal amount so that the gauge may operate unattended  for a week at a time except in regions of very intense precipitation which may exceed the capacity of the gauge.

A typical chart of rainfall record of a day from the weighing-bucket type rain gauge with reverse mechanism in action is shown in Fig. 5.6.

In this chart the pen had reversed its path of travel (from upward movement to downward movement) at 3.40 h of the next day after recording 100 mm of rainfall.

Therefore, for instance, the cumulative rainfall recorded by the gauge at say 5 h of the next day is 100 + 30 =130 mm. The bucket is  set to zero whenever the chart is changed. 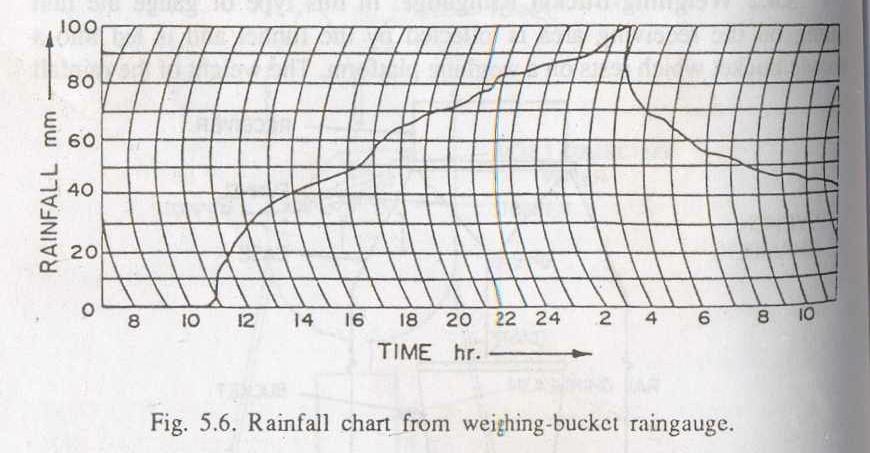 The main usefulness of this type of gauge is that it can record snow, hail and mixture of rain and snow. All forms of precipitation are weighed and recorded automatically.

The effects of temperature and friction on weighing mechanism may introduce errors in the record, ( shrinkage and expansion of the chart paper caused by changes in humidity may distort the time and the scale of rainfall Failure of reverse mechanism results in the loss of record.

The last difficulty may be eliminated by using only a single traverse of the pen but by reducing the scale of record graph.

This type of rain gauge is also known as the siphon rain gauge as it uses the siphon mechanism to empty the rain water colleted in the float chamber.

This is adopted by LM.D. The construction  of this type of rain gauge are shown in Fig. 5.7. Rain water entering the gauge at the top is led into the float chamber through a funnel and filter.

The purpose of the filter is to prevent dust and other Particles from entering the float chamber which may hinder the siphon mechanism. 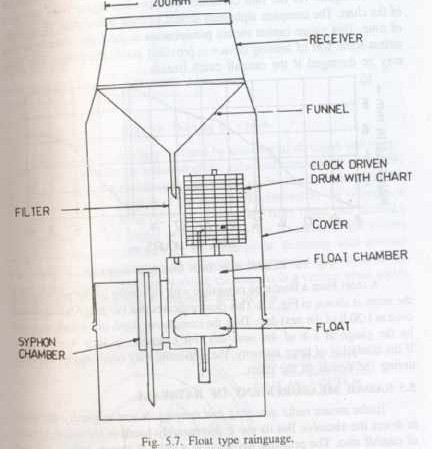 The  float  chamber  consists,  of  a  float  with  a  vertical  stem  producing outside, to the top of which a pen is mounted.

This pen rests on a chart secured around a clock driven drum.

This is called the siphon chamber which houses a small vertical pipe with bottom end open and the top end almost touching the top of the chamber.

When the float chamber is completely filled with water, the pen reaches the top of the chart.

At this instant the siphoning occurs automatically through the pipe in the siphon chamber, he float chamber is emptied and the pen is brought to zero the chart again.

As the rainfall continues the pen rises again from the zero of the chart.

The complete siphoning should be over in less than 15 seconds of time.

This gauge cannot record precipitation in the form other than rain unless some sort of heating device is provided inside the gauge.

The float may be damaged if the rainfall catch freezes.

Chart indicates that the gauge has siphoned once at 1:30 h of the next day.

If the rainfall is of large intensity, the siphoning may occur more than once during the period of the chart.