HYDROLOGIC CYCLE definition and the process are explained in detail below.

HYDROLOGIC CYCLE is the series of conditions through which water changes from vapor in the atmosphere through precipitation upon land surface or water surfaces and ultimately back into the atmosphere as a result of evaporation and transpiration.

Water occurs on the earth in all its three states, viz. liquid, solid and gaseous, and in various degrees of motion.

Evaporation of water from water bodies such as oceans and lakes, formation and movement of clouds, rain and snowfall, stream flow and ground water movement are some examples of the dynamic aspects of water.

The various aspects of water related to the earth can be explained in terms of a cycle known as the hydrologic cycle.

Figure 1 is a schematic representation of the hydrologic cycle. 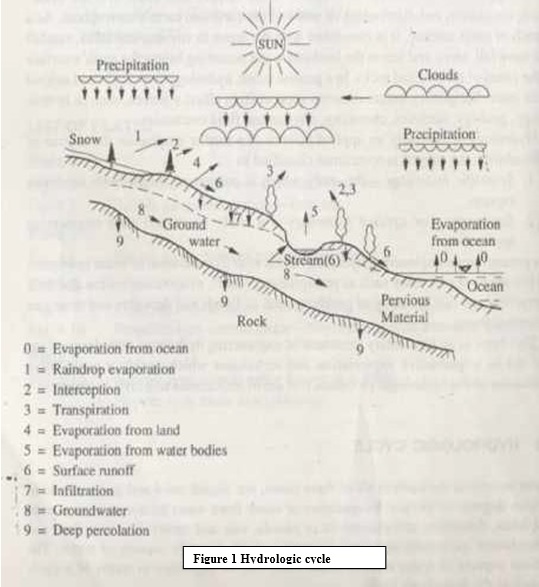 A convenient starting point to describe the cycle is in the oceans. Water in the oceans evaporate due to the heat energy provided by solar radiation.

The water vapour moves upwards and forms clouds. While much of the clouds condense and fail back to the oceans as rain, a part of the clouds is driven to the land areas by winds.

There they condense and precipitate onto the land mass as rain, snow, hail, sleet, etc.

A part of the precipitation may evaporate back to the atmosphere even while falling.

Another part may be intercepted by vegetation, structures and other such surface modifications from which it may be either evaporated back to atmosphere or move down to the ground surface.

A portion of the water that reaches the ground enters the earth’ s surface.through infiltration, enhance the moisture content of the soil and reach the groundwater body.

Vegetation sends a portion of the water from under the ground surface back to the atmosphere through the process of transpiration.

The precipitation reaching the ground surface after meeting the needs of infiltration and evaporation moves down the natural slope over the surface and through a network of gullies, streams and rivers to reach the ocean.

The groundwater may come to the surface through springs another outlets after spending a considerably longer time than the surface flow.

The portion of the precipitation which by a variety of paths above and below the surface of the earth reaches the stream channel is called runoff.

Once it enters a stream channel runoff becomes stream flow.

The sequence of events as above is a simplistic picture of a very complex cycle that has been taking place since the formation of the earth.

It is seen that the hydrologic cycle is a very vast and complicated cycle in which there are a large number of paths of varying time scales.

Further, it is a continuous recirculating cycle in the sense that there is neither a beginning nor an end or a pause.

Path of the hydrologic cycle

The quantities of water going through various individual paths of the hydrological cycle can be described by the continuity equation known as water budget equation or hydrologic equation.

The  hydrological  cycle  has  important  influences  in  a  variety  of  fields including  agriculture,  forestry,  geography,  economics,  sociology  and  poitical scene.

Engineering applications of the knowledge of the hydrologic cycle, and hence of the subjects of hydrology, are found in the design and operation of projects dealing with water supply, irrigation and drainage, water power, flood control, navigation, coastal works, salinity control and recreational uses of water.