Agrobacterium tumefaciens is a soil inhabiting bacterium and has Ti (tumor inducing) plasmid.

This bacterium invades crops such as tomato, sunflower, brinjal and cotton and causes crown gall disease which is in the form of tumerous growth.

The Ti plasmid carried by the pathogenic bacterium causes tumours.

For effective cloning of foreign genes by the plant cells, and for introduction of genes into plant system, Agrobacterium strains are modified by the removal of tumour – inducing genes from the bacterium.

T–DNA is the part of Ti plasmid transferred into plant cell DNA.

The T–DNA which holds the desired foreign gene after splicing is introduced into the plant cell.

The bacterial plasmid do not produce tumerous growth since the gene had been deleted.

Once the T–DNA along with the spliced gene is introduced, it combines with the chromosome of the donor cell where it produces copies of itself, by migrating from one chromosomal position to another.

Through tissue culture methods, such plant cells are cultured, induced to multiply and differentiate to form into plantlets.

The plantlets are transplanted to soil, where they are allowed to express the foreign gene introduced into them when they multiply and grow in larger population.

How DNA is cut?

All bacteria produce atleast one type of restriction enzymes.

They are meant to help the recombinant researchers to enable them to cut the DNA but to help in the very survival of the bacterial species against the invading bacterial viruses.

Two DNA molecules with sticky ends (ends that are staggered or uneven) tend to join with other molecules with a complementary sequence of nucleotides in the ends.

With the same enzyme, DNA fragments are cut with the matching sequence of nucleotides which complements with the sticky ends.

Fragments of DNA from different organisms or even from different species may be joined together at their sticky ends, thereby producing recombinant DNA.

This is made possible by the use of an enzyme called ligase. Hence, ligase is used to join the two DNA fragments. 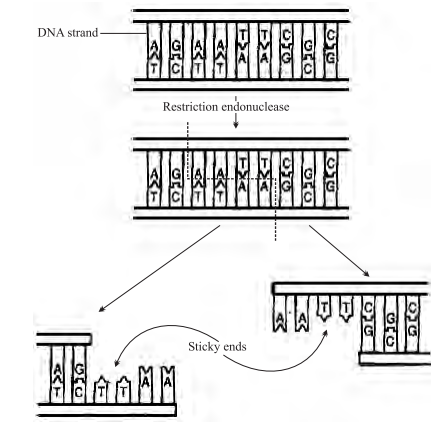 Restriction enzyme and ligase do not care about the source of DNA.

Whenever the correct sequence of nucleotides are met with by the specific restriction endonuclease, it cuts it.

Similarly whenever the correct sequences of nucleotides at their sticky ends in the two strands are met with, these are ligated (joined) by the enzyme ligase.

A sample of therapeutic drugs presently manufactured through recombinant DNA is found in the table given below.

Status of tissue culture technology in India And application

Single cell protein and its uses